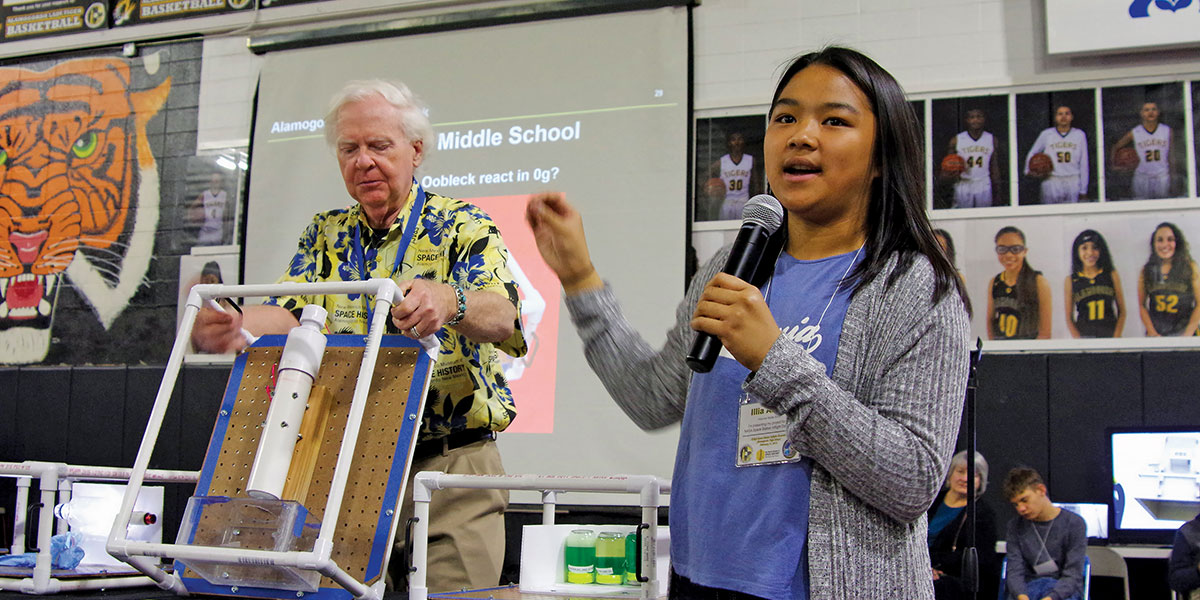 STEM education has been a part of the New Mexico Museum of Space History’s mission since before it was STEM–or STEAM. From the beginning, the museum’s mission statement read: “to educate the people…on the history, science and technology of space.” Today, more than 40 years later, the mission and the execution hold steady in the very capable hands of the museum’s Rocketeer Academy educators who reach thousands of students across the state each year.

Most recently, NASA chose the museum to host a downlink from the International Space Station in conjunction with the Alamogordo Public Schools and the New Mexico School for the Blind and Visually Impaired. Teams of middle-school and high-school students worked for months before the event, designing and building their own payloads based around the effect of near weightlessness on fluids. On downlink day, the student teams posed questions to Astronaut Scott Tingle aboard the ISS—and more than 3,000 students from across the district had the opportunity to watch and listen.

Whether it’s bringing the museum’s portable planetarium to Santa Rosa schools or hosting groups at the museum for an Alien Autopsy, STEAM education plays an increasingly important role in how Rocketeer Academy educators reach out to students. “The workforce of the future depends on the students of today nurturing an interest in Science, Technology, Engineering, Art and Math. Including Art in the equation gives students the opportunity to further expand their horizons by adding creativity to their passion,” said Museum Executive Director Christopher Orwoll.

The world’s first atomic bomb was detonated at Trinity Site July 16, 1945, on what is now the north end of White Sands Missile Range. The New Mexico Museum of Space History hosts a motor coach tour to the Trinity Site the first Saturdays in April and October.

The Museum of Indian Arts & Culture