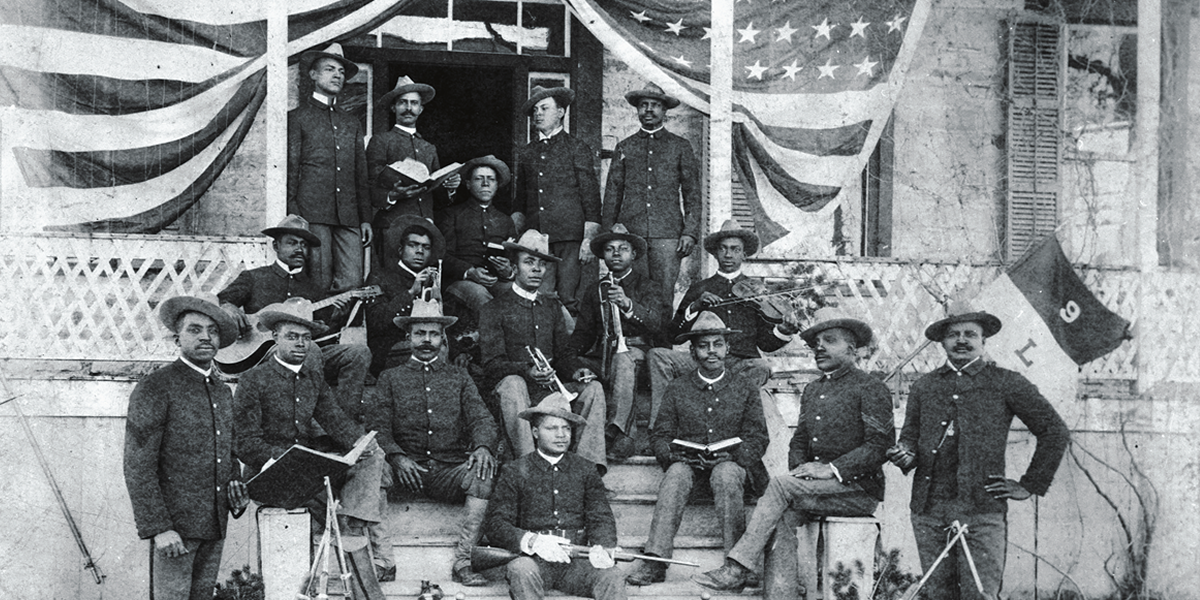 Non-commissioned officers from Troop L of the 9th Cavalry, or “Buffalo Soldiers,” are shown at Ft. Wingate, N.M., in 1899. Photo by Imperial Photo Gallery, courtesy of the Palace of the Governors Photo Archives, Neg. No. 098373.

During the late 19th-century a series of frontier forts dotted the New Mexican landscape, garrisoned by soldiers tasked with not only protecting citizens but also with assisting in the construction of roads, communication lines, and other infrastructure needed by the growing territory.

A significant number of these servicemen were African-American and between 1866 and 1900 these Buffalo Soldiers served at 11 of New Mexico’s 16 frontier forts. Three of these former Army posts are currently preserved and interpreted by New Mexico Historic Sites; Fort Stanton, Fort Sumner and Fort Selden.

More than 175,000 African-American men served in segregated army units during the American Civil War. Beginning in 1866 the War Department began consolidating these regiments into peacetime units, eventually settling on two infantry regiments and two cavalry regiments. The origin of the term Buffalo Soldier is still debated by historians, but the Buffalo Soldiers National Museum asserts that Cheyenne warriors gave the name to members of the 10th Cavalry Regiment in reference to the troopers’ physical appearances and their fierce actions during battles.

The first Buffalo Soldiers to serve in New Mexico arrived in 1866 when members of the 57th and 125th Infantry Regiments camped at Fort Sumner while on route south to Forts Stanton and Selden. Beginning in late 1875, the famed ninth Cavalry relocated their regimental headquarters to Fort Union, New Mexico. Members of the ninth Calvary deployed to Forts Bayard, Craig, Cummings, McRae, Selden, Stanton, Tularosa and Wingate. While in New Mexico men of the ninth Cavalry participated in campaigns against the Apache during “Victorio’s War” and assisted territorial officials during the violent frontier conflicts that erupted in Lincoln and Colfax counties.

After the ninth Calvary left New Mexico in 1881 no Buffalo Soldier regiments served in the territory until the 10th Cavalry moved to Fort Bayard in 1887. As the American Frontier began to close, The 24th Infantry served at Fort Bayard from 1888 to 1896, Fort Selden from 1888 to 1891, and at Fort Stanton for three months in 1896. The final Buffalo Soldiers to serve in the Land of Enchantment were members of the 25th Infantry Regiment and ninth Cavalry Regiment who were stationed at Forts Bayard and Wingate between 1898 and 1899.

Fort Selden is open 8:30 a.m.–5 p.m. Wednesday through Sunday. Closed Mondays and Tuesdays. Admission: $5. Free to NM residents on the first Sunday of each month. Children 16 and under are always admitted free. Wednesday free to New Mexico Seniors with ID.