The skies. The light. The rolling hills. The people. 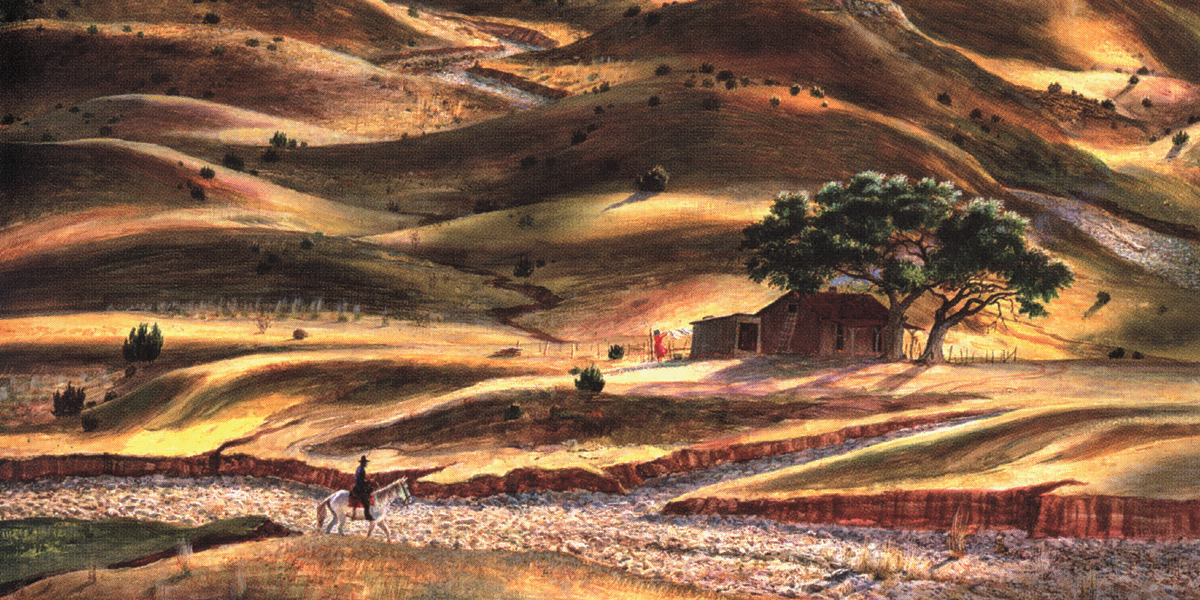 An exhibition at the New Mexico Farm & Ranch Heritage Museum in Las Cruces captures the essence of one of our state’s great artists — Peter Hurd.

Drawn to the Land: Peter Hurd’s New Mexico features 24 paintings and some of the artist’s belongings, including one of his palettes, a pair of chaps, sombrero, guitar, and polo helmet and mallet. The show, which includes loans from the Hurd La Rinconada Gallery in San Patricio, N.M., and the El Paso Museum of Art, also features a video about Hurd (1904–1984).

“We’re so pleased to present the work of Peter Hurd at the New Mexico Farm & Ranch Heritage Museum,” said Lisa Pugh, the Museum’s Chief Curator. “Through his portraits and paintings, Hurd celebrated a uniquely New Mexican way of life and depicted the inexplicable beauty of the southern high plains in a way no other artist could.”

Hurd, who was born and raised in the Roswell area, settled in southeastern New Mexico’s Hondo Valley after attending West Point, serving as a war artist correspondent during World War II, and living in Pennsylvania, where he met his wife, Henriette Wyeth. The artist is celebrated for his realistic portraits and luminous Southwestern landscapes that feature the vegetation, rolling hills, windmills, water tanks, and ever-changing skies of the area in Lincoln and Chaves counties.

Unlike many artists who are proficient in a few mediums, Hurd was skilled in a variety of media including oil, lithography, watercolor, egg tempera, and charcoal. Light was critically important in Hurd’s work and he strove to render it accurately. Hurd felt that the medium of egg tempera allowed him to truly capture the shifting light and arid landscape of New Mexico.

“If a work of art represents a particular artist’s view of the world, Peter Hurd’s work conveys how inspired he was by nature and his surroundings,” said Holly Radke, the Museum’s Collections Manager who curated the exhibit. “He is best known as a regionalist painter who captured the hardworking people and landscapes of southeastern New Mexico.”

By the time of his death in 1984, Hurd had become synonymous with New Mexico. His obituary in the New York Times was headlined, “Peter Hurd, Painter of Southwest.”

The New Mexico Farm & Ranch Heritage Museum visitors can enjoy watching wool spinning on Tuesdays, sewing and weaving on Wednesday mornings, quilting on Thursday and Friday mornings, blacksmithing on the weekends, and milking every day.