LAS CRUCES – The Historical Society of New Mexico is presenting its top publication award to New Mexico Farm & Ranch Heritage Museum Director Mark Santiago for his book, “A Bad Peace and a Good War: Spain and the Mescalero Apache Uprising of 1795-99.”

The Gaspar Pérez de Villagrá Award is presented annually to the author of an outstanding publication in New Mexico or Southwest borderlands history. Santiago will be formally presented the award at the HSNM’s annual awards banquet at the 2019 New Mexico History Conference in Albuquerque at the Embassy Suites Hotel on March 30. A book-signing will follow.

This book, published by the University of Oklahoma Press, challenges long-accepted historical orthodoxy about relations between the Spanish and the Indians in the borderlands, separating what are now Mexico and the United States. While most scholars describe the decades after 1790 as a period of relative peace between the occupying Spaniards and the Apaches, Santiago sees in the Mescalero Apache attacks on the Spanish beginning in 1795 a sustained, widespread, and bloody conflict. He argues that Commandant General Pedro de Nava’s coordinated campaigns against the Mescaleros were the culmination of the Spanish military’s efforts to contain Apache aggression, constituting one of its largest and most sustained operations in northern New Spain. A Bad Peace and a Good War examines the antecedents, tactics, and consequences of the fighting.

This conflict occurred immediately after the Spanish military had succeeded in making an uneasy peace with portions of all Apache groups. The Mescaleros were the first to break the peace, annihilating two Spanish patrols in August 1795. Galvanized by the loss, Commandant General Nava struggled to determine the extent to which Mescaleros residing in “peace establishments” outside Spanish settlements near El Paso, San Elizario, and Presidio del Norte were involved. Santiago looks at the impact of conflicting Spanish military strategies and increasing demands for fiscal efficiency as a result of Spain’s imperial entanglements. He examines Nava’s yearly invasions of Mescalero territory, his divide-and-rule policy using other Apaches to attack the Mescaleros, and his deportation of prisoners from the frontier, preventing the Mescaleros from redeeming their kin.

Santiago concludes that the consequences of this war were overwhelmingly negative for Mescaleros and ambiguous for Spaniards. The war’s legacy of bitterness lasted far beyond the end of Spanish rule, and the continued independence of so many Mescaleros and other Apaches in their homeland proved the limits of Spanish military authority. In the words of Viceroy Bernardo de Gálvez, the Spaniards had technically won a “good war” against the Mescaleros and went on to manage a “bad peace.”

The award is named for Gaspar Pérez de Villagrá, a poet and soldier, born around 1668. Captain Gaspar Pérez de Villagrá arrived in New Mexico as a member of the expedition of don Juan de Oñate in 1598. Although a “creole” by birth, being a native of the city of Puebla de los Ángeles in New Spain, he went to Spain to study at the famed University of Salamanca before entering military service. His epic poem telling of the travails of the Oñate expedition, La Historia de Nueva España, has been described as the first history published that portrays a part of the future American nation.

Santiago has served as the Farm & Ranch Museum’s director since 2006, and was director of the New Mexico Museum of Space History for six years before coming to Las Cruces. A native of Arizona, he also is author of “The Jar of Severed Hands: Spanish Deportations of Apache Prisoners of War, 1770-1810.” 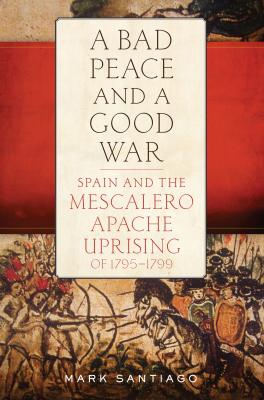 Farm & Ranch Heritage Museum Director Mark Santiago's book, "A Bad Peace and a Good War," is published by the University of Oklahoma Press.