(Santa Fe, New Mexico) – The New Mexico Museum of History (NMMH) welcomes Dr. Richard Wallace, who will present his lecture, “The Past and Future of Manned Space Exploration” on Friday, July 19, 2019 at 7:00 p.m. Organized as part of NMHM’s Moon Festival, honoring the 50th anniversary of the Apollo moon landing, the lecture centers on past, current, and future space exploration efforts.

More than 400,000 people were involved in one capacity or another in the Apollo 11 mission to the moon on July 20, 1969. The collaborative effort marked the advancement not only in space exploration but in mathematics, sciences, and technology. More than 600 million people around the globe watched as the Apollo 11 team took humankind’s first steps on the moon and in the wake of these steps came expeditions into space, both manned and machine-operated. Dr. Richard Wallace’s multimedia lecture, "The Past and Future of Manned Space Exploration" addresses what expeditions to space look like fifty years later.

Audiences will enjoy a compendium of NASA video footage detailing the Apollo mission as well as daily life in space. The footage highlights unique experiences such as taking a shower, eating on a spacecraft, or working aboard the International Space Station (ISS) before the discussion moves to the future of manned space expeditions. Dr. Wallace will present to-scale model rockets and consider private company plans to establish bases on Mars, as well as the idea of mining natural resources from space to replenish Earth’s depleting stores.

Dr. Richard Wallace has a Ph.D. in Astronomy & Astrophysics from U.C. Santa Cruz (Lick Observatory), with a concentration in numerical calculations of stellar explosions (Novae, Supernovae, Gamma Ray Bursts), and nuclear fusion. He is currently one of the astronomers who develops and presents presentations for the Los Alamos Nature Center Planetarium, and is President of the Board of Directors for the Pajarito Environmental Education Center, which runs the Los Alamos Nature Center. He retired from Los Alamos National Laboratory after 30 years, where he worked on physics simulations, the security of Russian nuclear material after the fall of the USSR, and international safeguards. He is currently involved in nature photography, STEM and astronomy education.

Dr. Wallace Presents “The Past and Future of Manned Space Exploration”

Tickets: This event is free 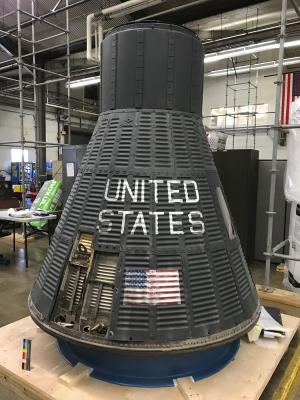 Vivid in Japanese art and imagination are creatures that are at once ghastly and comical. Yôkai is a catchall word
more »