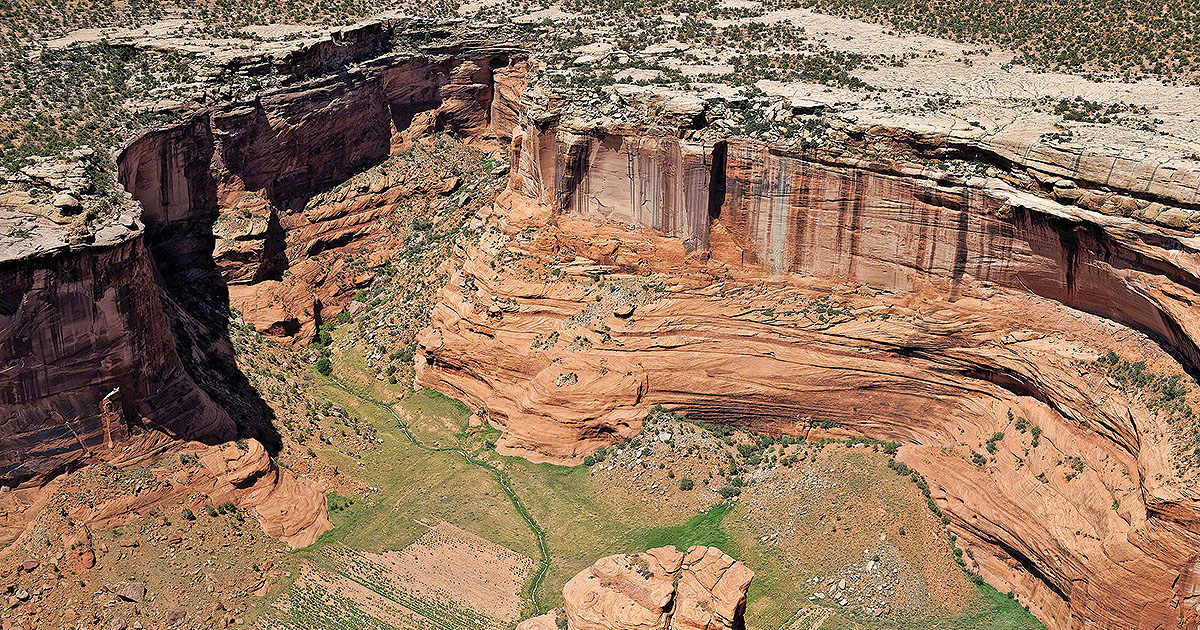 Time passes, landscapes shift, and the only thing constant is change. Mankind has a vested interest in observing the effects of time, comparing what is to what was to better navigate what is ahead. Oblique Views: Archaeology, Photography, and Time compares photographs of the same landscapes taken eight decades apart.

In 1929, newlywed American aviator Charles Lindberg and his bride Anne swept through the skies of the Southwest, photographing significant archaeological sites. The photos are among the earliest aerial photographic surveys of these sites.

After more than seven decades passed, the Lindberghs’ 198 nitrate negatives of these archaeological landscapes were deteriorating. In 2004, Archaeology Southwest, an organization whose mission is to explore and protect the places of the past, conceived of the Oblique Views project during efforts to scan and preserve those negatives. Adriel Heisey was commissioned to capture new photographs of these archaeological sites to see what changes they revealed.

During 2007 and 2008, Heisey recreated near-exact images of the current landscapes, corresponding with the Lindberghs’ perspective, painstakingly matching the time of year, and time of day. Flying at alarmingly low altitudes and slow speeds while holding his camera with both hands, Heisey leaned out the door of his light plane, and re-photographed the same sites. To ensure he had captured near perfect reproductions, Heisey placed a laptop next him in the cockpit to compare the images he captured with copies of the Lindbergh photos.

The Oblique Views: Archaeology, Photography, and Time exhibition features seventeen large-scale, then-and-now pairings of the Heisey and Lindbergh photographs, revealing layers of civilizations of the American Southwest from a vantage point few people will ever experience. The side-by-side comparison of the modern images to the original photographs clearly illustrates the passage of time.

In this exhibition, the Lindberghs’ grainy, black-and-white shots record specific sites before excavations, development, and the passage of eight decades, and stand in contrast to Heisey’s more recent photographs.

Oblique Views: Archaeology, Photography, and Time runs through May 7, 2017 at the Museum of Indian Arts and Culture on Museum Hill in Santa Fe.

Also at the Museum of Indian Arts and Culture:

Through October 22, 2017: Into the Future: Culture Power in Native American Art.