A new, rotating wall display in the Museum’s central corridor is called “Her Land: Women in Agriculture.” The first person featured in the exhibit is Felicia Thal, a longtime rancher in northeastern New Mexico who passed away last year at the age of 92.

The exhibit, which is now on display, will be changed every four months to feature a different woman involved in New Mexico agriculture. Moving forward, an emphasis is being placed on contemporary leaders and those who represent the future.

“Museums typically focus on the stories of our ancestors and their incredible accomplishments,” said Museum Executive Director Heather A. Reed. “We often forget to look around to see that history is unfolding right in front of us within our communities and our state. Her Land spotlights the amazing feats and contributions of modern-day women and showcases the young women working on the future of agriculture. This ongoing project will rotate every few months and will allow us to record history in real time for generations to come.”

The first honoree led an extraordinary life. Mrs. Thal was born in Durban, South Africa, in 1928. Her adventures led her and her husband, Alan, to New York, Minnesota, Detroit, Kansas City, and eventually New Mexico in 1972. The Thals decided to make cattle ranching a priority and fell in love with the northeastern part of the state and bought a ranch north of Las Vegas, N.M.

Mrs. Thal, a woman of varied interests and many talents, began to focus on raising cattle and quickly became one of the state’s leaders in the industry. While living on the ranch in the Mora Valley, Felicia took a leadership role in several organizations including the Cattle Growers Association where she executed a successful healthy-beef campaign. She helped develop the New Mexico Beef Council and was the first female to be chosen as Cattleman of the Year.

Felicia Thal was an early supporter and founding member of the New Mexico Farm & Ranch Heritage Museum. She fought hard to make the dream of a museum that celebrates agriculture in New Mexico, a reality.

The display details Mrs. Thal’s journey and features photographs and objects, including branding irons from her ranch.

About the New Mexico Farm and Ranch Heritage Museum:

The New Mexico Farm & Ranch Heritage Museum in Las Cruces is a division of the Department of Cultural Affairs. The 47-acre interactive museum brings to life the 4,000-year history of growing food and fiber in this region. Accredited by the American Alliance of Museums, it features livestock, indoor and outdoor exhibits, barns, greenhouse, gift shop, and demonstrations. 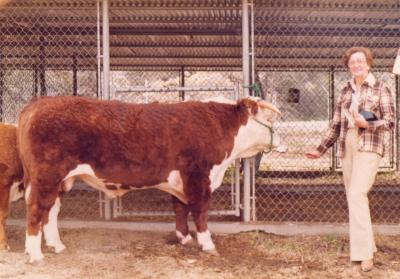 Felicia Thal poses with one of her prize Hereford bulls. Thal (1928-2020) is the first person featured in the New Mexico Farm & Ranch Heritage Museum's new rotating exhibit, "Her Land: Women in Agriculture."