SANTA FE - Celebrated organist Maxine Thévenot will perform a concert on the recently restored Frederick R. Haas Pipe Organ in the St. Francis Auditorium on December 11, 2021. Scheduled for 5:00 pm in the historic auditorium of New Mexico Museum of Art (NMMOA), the concert will include traditional holiday music as well as a selection of organ compositions by Johann Sebastian Bach, Johannes Brahms, and other notable composers.

The concert will also mark the return of the pipe organ, which has not been played publicly since 2014 and was recently refurbished in 2021 thanks to a generous donation from the Philadelphia-based Wyncote Foundation and foundation trustee Frederick R. Haas.

Tickets for the concert are $15 for general admission, $10 for New Mexican residents, and $7.50 for members of the New Mexico Museum Foundation. Tickets are available on the NMMOA website, nmartmuseum.org.

“This pipe organ is a hidden gem in the collection of the Museum. Coming out of a long period of minimal maintenance, it is in remarkably good condition,” says Haas, who studied organ at the Oberlin Conservatory of Music and, with the Wyncote Foundation, has earned national recognition for historic organ preservation. “The new Kegg console brings the organ up to the highest standard of playability, making it even easier for all organists to play and make their music. With the recent care put into it, the organ returns to public life with this concert. Long may it be enjoyed by everyone who comes here to hear it!”

Undertaken by Kegg Pipe Organ Builders, the restoration includes the creation of a new console, updated wiring, a thorough cleaning, and a rebuild of the expression system. The McNary family of El Paso originally donated the organ in 1937 but the instrument had not received significant attention since the 1950s.

“One of the NMMOA curiosities is almost entirely invisible to the public eye. However, behind its façade stand over 2,100 pipes ranging from the size of a pencil to 16 feet in length. This uniquely situated instrument is capable of taking us on a sonic journey through 500 years of keyboard music,” Maxine Thévenot says. “I look forward to playing on the new Kegg console which will greatly facilitate bringing the sound world of the early 20th century back to life to further enhance the cultural life of the City of Santa Fe and all who visit.”

Acclaimed for her “solid musicianship, technical security and poise” by The American Organist (AGO), Maxine Thévenot is a versatile artist hailed for her skillful musical playing, conducting, and accompanying. Winner of the Canadian Bach competition in 2000, her recital career has taken her to major venues including Westminster Abbey, St. Paul’s Cathedral, London and Notre Dame, Paris. A featured performer in national and regional American Guild of Organists (AGO) and Royal Canadian College of Organists conventions, she has broadcast on CBC, NPR and has made 16 commercially released recordings for Raven CD.

Canon Dr. Thévenot is Director of Cathedral Music and Organist at the Cathedral of St. John; Founding and Artistic Director of New Mexico’s professional vocal ensemble-Polyphony: Voices of New Mexico; and is adjunct faculty at UNM as pipe organ instructor and chapel organist at the Alumni Chapel. As chorus master, she has and continues to collaborate with Performance Santa Fe and Santa Fe Pro Musica and has conducted the New Mexico Philharmonic in large-scale choral works.

A member of the duo, Air & Hammers, she concertizes with her husband, English baritone, Edmund Connolly.  Dr. Thévenot received a bachelor’s degree in Music Education from the University of Saskatchewan (with Distinction), a Master of Music, and Doctor of Musical Arts degrees from Manhattan School of Music where she was twice awarded the Bronson Ragan Award for “most outstanding ability in organ performance.” Dr. Thevenot is an Associate of the Royal Canadian College of Organists and of the Royal Conservatory of Music, Toronto. She was made an Honorary Fellow of the National College of Music, London, UK in 2006 for her “services to music.” 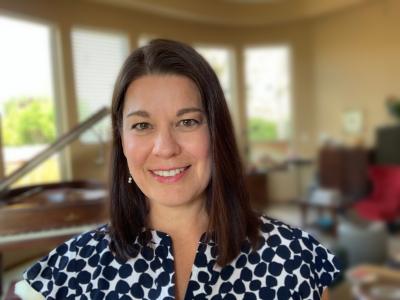