(Santa Fe, NM)— Museum of International Folk Art’s exhibition Multiple Visions is in the beginning phases of restorative process, providing staff and museum patrons a deeper look at the details Alexander Girard orchestrated more than twenty-five years ago. The extensive cleaning allows audiences to see the details of Girard’s beloved exhibition that have been hidden for decades.

Since 1982, Santa Fe residents and visitors have had Girard’s personal folk art collection at their fingertips. An artist installation created before that became common in museums, the museum’s Alexander Girard Wing displays about 10,000 items from the famous designer’s collection. Girard designed and personally installed every object in the display, emphasizing his signature color blocking, attention to texture, and modernist styles into tableaus. He envisioned a whimsical, immersive, entirely visual experience, creating villages and scenes without labels so that guests of all ages and backgrounds may enjoy the collection. To enhance this experience, the museum has begun the process of cleaning and cataloging the Multiple Visions exhibition which has produced unique finds for those involved in the process. The cleaning and documenting are being undertaken with support from both the State of New Mexico and the Museum of New Mexico Foundation, which is soliciting donations as part of a Girard capital campaign.

Photographer Kitty Leaken discusses her findings. “We are cleaning and photographing every single item in several different ‘cities’ of Multiple Visions and discovering little surprises along the way that perhaps Mr. Girard playfully intended. There is a teddy bear in a girl’s dress with tiny little human hands and feet, a horse with a yellow hat, doll houses with lace curtains and a hidden bathtub, gatherings of mermaids and sneaky snakes.”

The process of cleaning and preserving the integrity of Girard’s design while making structural improvements is lengthy. Each “city” or collection is comprised of objects arranged into tableaus that must be cleaned, documented, and replaced exactly as Girard intended. By the end of the process, all 10,000 pieces on view will be tagged and cataloged for digital guide to the exhibition. Santa Fe residents now have a rare opportunity to see the long-term exhibition in a new way each Tuesday and Wednesday during museum hours.

Leaken provides examples of such opportunities enhancing the exhibition for attendees, “There is a priest who had been in the dark until we accessed the big church atop the hill in the Mexican village scene of Acatlan. We oriented a mirror to reflect light from an overhead spot so now he can be seen by museum visitors.”

To celebrate Girard’s work, both as a modernist designer and a Santa Fe’s premier folk art collector, MOIFA will host the Vitra Design Museum’s traveling exhibition, Alexander Girard: A Designer’s Universe from May 5 to October 27, 2019. Vitra’s traveling exhibition compliments Multiple Visions by merging Girard’s two halves into a complete picture. The traveling retrospective compliments MOIFA’s narrative about Girard’s collections. In evaluating the holistic identity to the public, MOIFA invites conversation about how folk art influenced his design. Museum Executive Director, Khristaan Villela, added that “Girard’s Multiple Visions exhibit is MOIFA’s permanent exhibit, beloved by generations of Santa Feans and tourists alike. We hope visitors will come and see how great the displays are looking.” Patrons have a chance to see the tenth of his personal folk art collection on view, and discover the details and artistry indicative of Girard’s iconic design and vision. 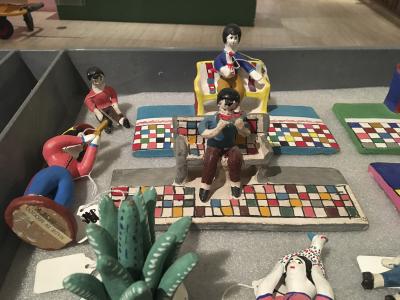