Social and Sublime: A Look at the Artists American Southwest

(Santa Fe, NM)—The New Mexico Museum of Art presents Social & Sublime: Land, Place, and Art, an artists’ response to the relationship between the American people and nature, on view from April 13 to August 25, 2019. The exhibition explores artistic trends through the museum’s in-house collection, challenging the idea that people are somehow detached from their environment.

The confluence of culture, survival, politics, and nature inspired artistic works as varied as the land’s development over the last one hundred years. Westward expansion gave U.S. artists new source material as they began moving away from European aesthetics. Social and Sublime features art that characterized land as very much alive—a formidable presence, or otherwise a force to be reckoned with.

The exhibition explores promise and fear at the core of America’s early, written history. Photographs and paintings feature the land as both opportunity and the unknown which changes as the U.S. began conserving its greatest resources. Artists used southwestern scenery to create a new cultural identity as they experimented with minimalism and abstraction while other works consider the legends that converge during U.S. industrialism. Paintings of stage coaches and trains represent technological advances while photos of 1960’s busses and lowriders illustrate statements within cultures and social movements. Concepts such as the mythic cowboy and the romantic West meet border and immigration issues, which echo into modern society while many artist responses highlight themes such as practicality and impermanence.

Curator Christian Waguespack crafts the narrative of Social and Sublime: Land, Place, and Art to stoke conversations that artists have been having for more than one hundred years. The exhibition continues that dialog of expansion, conflict, and wonder, leaving their influence on America’s 21st-century art.

The exhibition runs in concert with The Great Unknown: Artists at Glen Canyon and Lake Powell on view from March 30 to September 15, 2019. Together, they present artistic expressions of human experience and change, be it political, technological, or cultural, as it relates to the natural world. 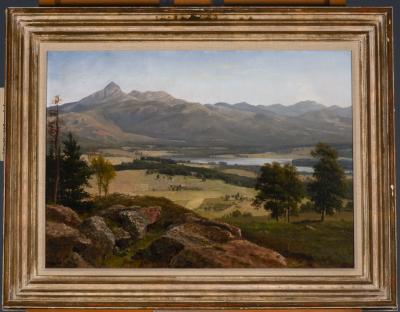